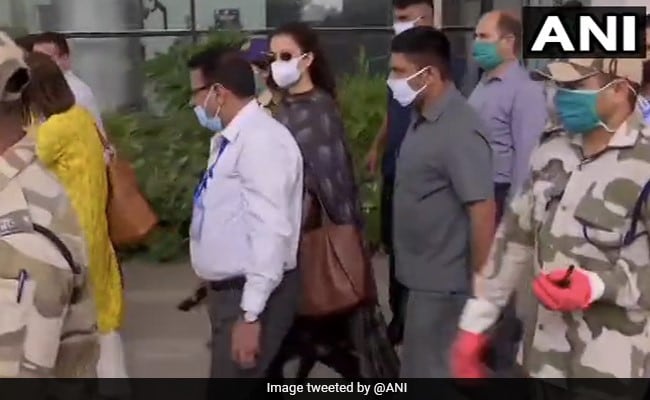 Kangana Ranaut is seen at the Mumbai airport, shortly before she left.

Actor Kangana Ranaut, locked in a bitter feud with Maharashtra’s ruling Shiv Sena, left Mumbai this morning saying she was doing so with a “heavy heart” after being “terrorised” with attempts to demolish her office. “Must say my analogy about PoK was bang on,” said the actor.

“With a heavy heart leaving Mumbai, the way I was terrorised all these days constant attacks and abuses hurled at me attempts to break my house after my work place, alert security with lethal weapons around me, must say my analogy about POK was bang on (sic),” she tweeted as she headed to the airport.

Kangana Ranaut, currently based in her hometown Manali, arrived in Mumbai last Wednesday amid huge media attention and a dramatic confrontation with the Shiv Sena as Mumbai’s civic body started demolishing what it called illegal alterations to her office in the city.

The “Queen” actor said the demolition, stopped on the orders of the Bombay High Court, was the Shiv Sena’s way of targeting her; Kangana Ranaut’s comments criticizing Mumbai Police and the Maharashtra government on the Sushant Singh Rajput case sparked a war of words which escalated when she compared Mumbai to PoK (Pakistan Occupied Kashmir) and said she felt unsafe in the city.

In her five days in Mumbai, the 33-year-old actor met with Maharashtra Governor Bhagat Singh Koshyari and also Union Minister Ramdas Athwale to demand action and compensation for the demolition.

She also declared that she would not renovate the building and instead work from its ruins as “a symbol of a woman’s will that dared to rise in this world”.