Wish we could have 2 winners today: Dominic Thiem after beating Alexander Zverev to win US open 2020 title

Wish we could have 2 winners today: Dominic Thiem after beating Alexander Zverev to win US open 2020 title

German world number 7 Alexander Zverev took the starting 2 sets against Dominic Thiem in the final of US Open 2020 but Dominic Thiem came from behind to win the next 3 sets and clinch his maiden Grand Slam title. 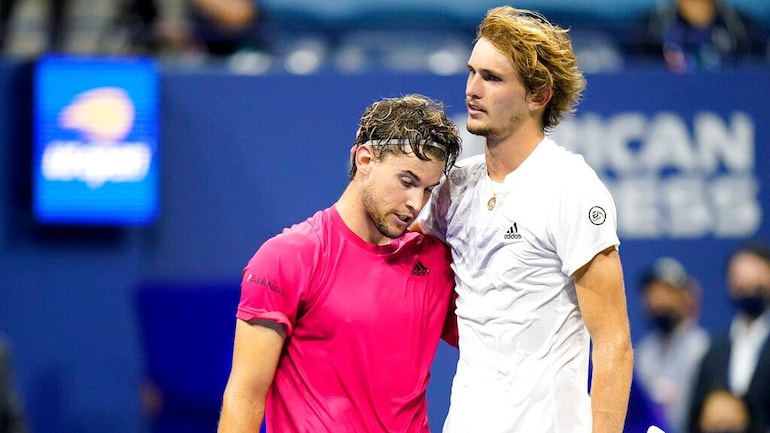 After a tear-eyed US Open 2020 men’s singles runner-up Alexander Zverev said that he wished to make his parents proud by taking the winners trophy home one day, first-time Grand Slam Champion Dominic Thiem expressed confidence that his “good friend” will make that happen soon.

Fifth seed Zverev made a double fault in the decisive 5th-set tiebreaker also. The 23-year-old was seen sitting with his head in his hands after his heart-breaking loss.

Then during the presentation ceremony he ended up in tears, adding that he wishes to make his parents proud by taking the winners trophy back home one day.

Dominic Thiem started his speech like a true champion and hailed Zverev for his achievements. He recalled his old friendship with Zverev and said it was amazing how far their journey has brought them. Thiem, who seeded 2nd at 2020 US Open, added that he wished there could be “two winners today”.

“I’d also like to start with you, Sascha. We started to know each other in 2014 when we were both ranked 100th or something and straight away we developed a great friendship.

“Then in 2016, I think, our great rivalry started again and we made great things happen on and off the court.

“It is amazing how far our journey brought us.

“I wish we could have two winners today, we both deserve it. You’re going to make it, 100%, make your parents proud,” Thiem said.

Dominic Thiem defeated Alexander Zverev 2-6 4-6 6-4 6-3 7-6(6) in a brutal and nerve-jangling US Open final on Sunday to clinch his maiden Grand Slam title. Marin Cilic in 2014 was the last first-time Grand Slam winner in men’s singles tennis.