Skullcandy’s headphones and earphones are often unique and radical, for reasons such as styling and features. Very often, you’ll see bright colours and adventurous designs on a Skullcandy headset, or features that no other brand would even think of, such as the sensory bass slider on the Skullcandy Crusher ANC. Although the typical audiophile might look down on Skullcandy, I’ve always found its personality rather endearing.

Secure and comfortable fit on the Skullcandy Indy Evo

Like the Skullcandy Indy which it is the successor of, the Indy Evo has an in-canal fit, with stems for the microphones and charging contact points. The styling is classic Skullcandy. Although plastic, the earpieces of the Skullcandy Indy Evo feel well built, and the subtle elements of industrial design such as the text on the earpieces and serial number on the charging case do make this perhaps the nicest-looking pair of true wireless earphones priced under Rs. 10,000.

What I quite liked about the design of the Skullcandy Indy Evo earpieces was the fit. The in-canal ear tips and ear were comfortable and secure, ensuring proper noise isolation. Even with a moderate level of activity (quickly climbing up and down flights of stairs, for example), the earpieces stayed securely in place in my ears and didn’t need to be readjusted.

The charging case of the Skullcandy Indy Evo is neither too small nor too large, and has a magnetic lid and USB Type-C port for charging. The earpieces latch in place magnetically and stay securely. The earphones turn themselves off and on automatically on placing them in or removing them from the charging case.

Touch controls on the earphones work well, and it’s possible to control playback, volume, calls, ambient sound mode, your voice assistant, and equaliser presets all from the earphones directly through easy gestures. Equaliser adjustment is an interesting touch, with three modes — podcast, movie, and music — with the sound specifically set up for each use case. 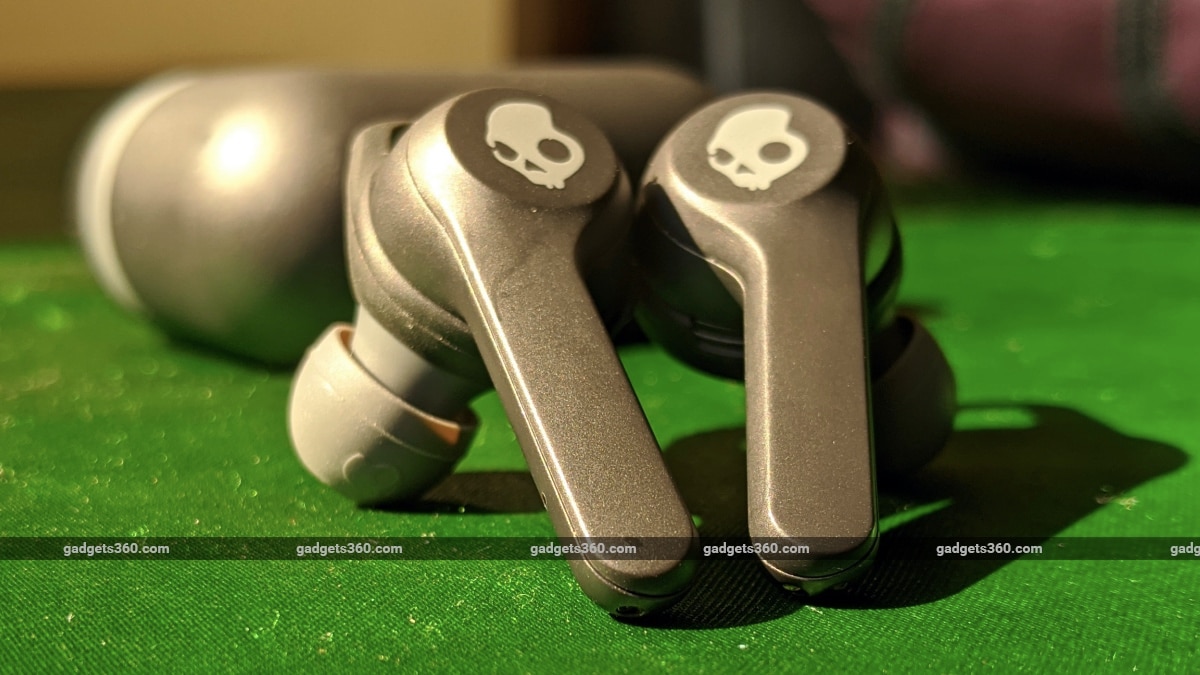 There is an app for the Skullcandy Indy Evo, but it doesn’t do much and you could just as easily use the earphones without it. The app provides a quick tutorial for the gesture controls, and then lets you toggle ambient mode or see what equaliser mode is active, but does nothing else of any significance.

Like other Skullcandy headsets, the Indy Evo supports Tile tracking. Once set up with the Tile app, you can track the location of each earpiece individually through the app and also cause them to beep loudly to help you find them in case you’ve lost them somewhere nearby. The functionality is basic, but it might be useful for some.

The Skullcandy Indy Evo uses Bluetooth 5 for connectivity, with support for only the basic SBC codec; the lack of support for AAC at this price is a bit disappointing. I did experience some connectivity issues with the earphones when listening to music, with the sound occasionally skipping or muting for a fraction of a second even though the phone and earphones were all close to one another. This happened when paired with two separate Android smartphones, but not with a MacBook Air, and was fixed by turning the earphones off and on again.

The earphones are powered by 6mm drivers, with a frequency response range of 20-20,000Hz. The sales package includes two pairs of ‘stability ear gels’ (the winged tips for a secure fit), three pairs of silicone ear tips, and a USB Type-C cable for charging.

Nothing special about the sound on the Skullcandy Indy Evo

Skullcandy’s affordable and mid-range headphones and earphones have seldom pleasantly surprised me, but I’ve usually not been disappointed either. The Skullcandy Indy Evo is no different; it’s a functional pair of earphones that plays it safe when it comes to sound quality. There’s nothing wrong with the sound, but there’s nothing particularly noteworthy about it either.

Furthermore, limiting these earphones to the SBC Bluetooth codec also seemed to have had an impact on sound quality. AAC codec support might have given the Skullcandy Indy Evo a slight boost in sound quality and detail. That said, the sound is enjoyable enough, and good passive noise isolation ensures a decent enough listening experience. 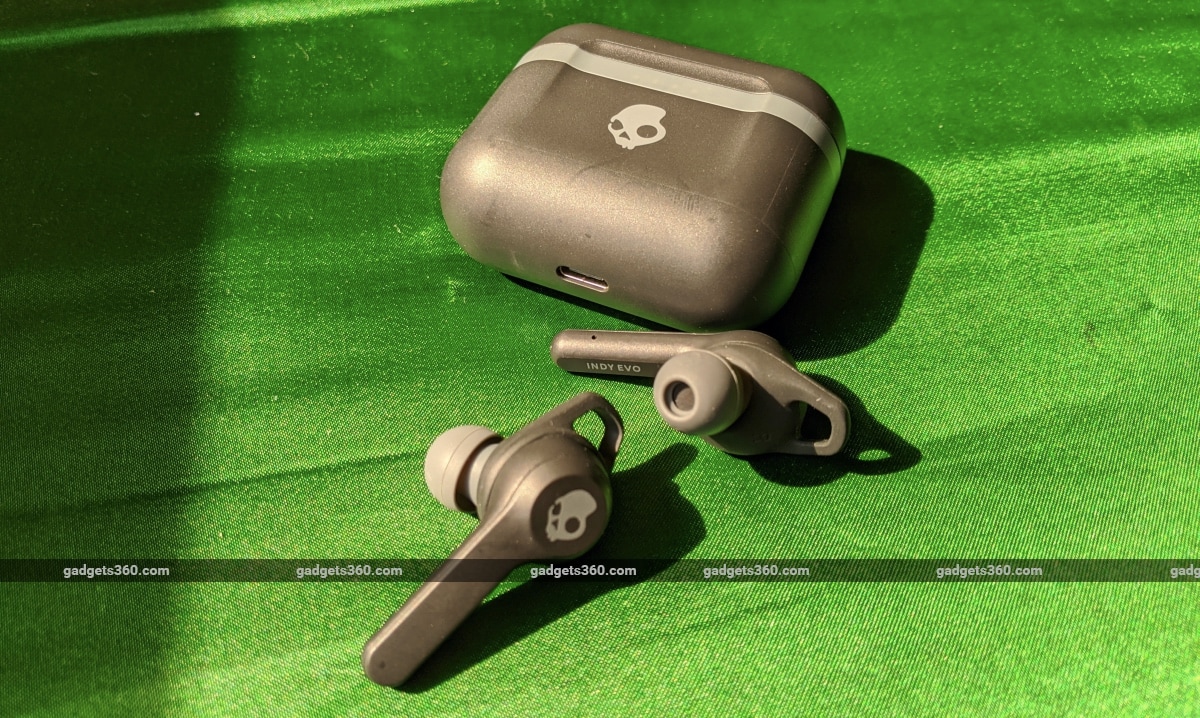 The earpieces run for around five hours per charge, while the case provides an additional four charges

Whether listening to high-resolution audio or typical compressed streams, the Skullcandy Indy Evo sounded largely the same. Even high-quality Dolby Atmos Music tracks didn’t seem to make any difference; this shouldn’t be a problem if you’re used to listening to basic streaming audio or compressed recordings, but the Skullcandy Indy Evo isn’t the ideal pick for users who have a good audio collection to work with.

Listening to Must Be The Love by Arty and Nadia Ali, the Skullcandy Indy Evo’s sonic signature proved to be extremely ‘safe’, sticking to the typical V-shaped sound that suits most popular music genres today. The sound was loud and punchy, with a definite bias towards the lows and highs. The sub-bass frequencies in particular sounded a bit more pronounced, but the lows held tight and always sounded refined rather than overbearing.

Although the sound is clean and comfortable, the Skullcandy Indy Evo falls short when it comes to detail. The soundstage also felt a bit narrow and just barely went beyond basic stereo separation. One of my favourite tracks to test detail and soundstage with is Love Love Love by Moullinex, and it just sounded a bit plain, with these earphones not managing to overcome the limited abilities of the SBC codec.

Some of the impressive interplay between the two channels that can be heard with more detailed headphones and earphones was absent on the Indy Evo the sound felt like it was coming from dead centre rather than simulating a wider ‘stage’ of sorts. Although there were occasions when detail was able to push through, this was more to the credit of the recording itself, rather than the earphones.

For phone calls, the Skullcandy Indy Evo works just fine. There are no additional features such as environmental noise cancellation, but the passive noise isolation and microphones worked capably enough to ensure good sound on both ends of the call for me. 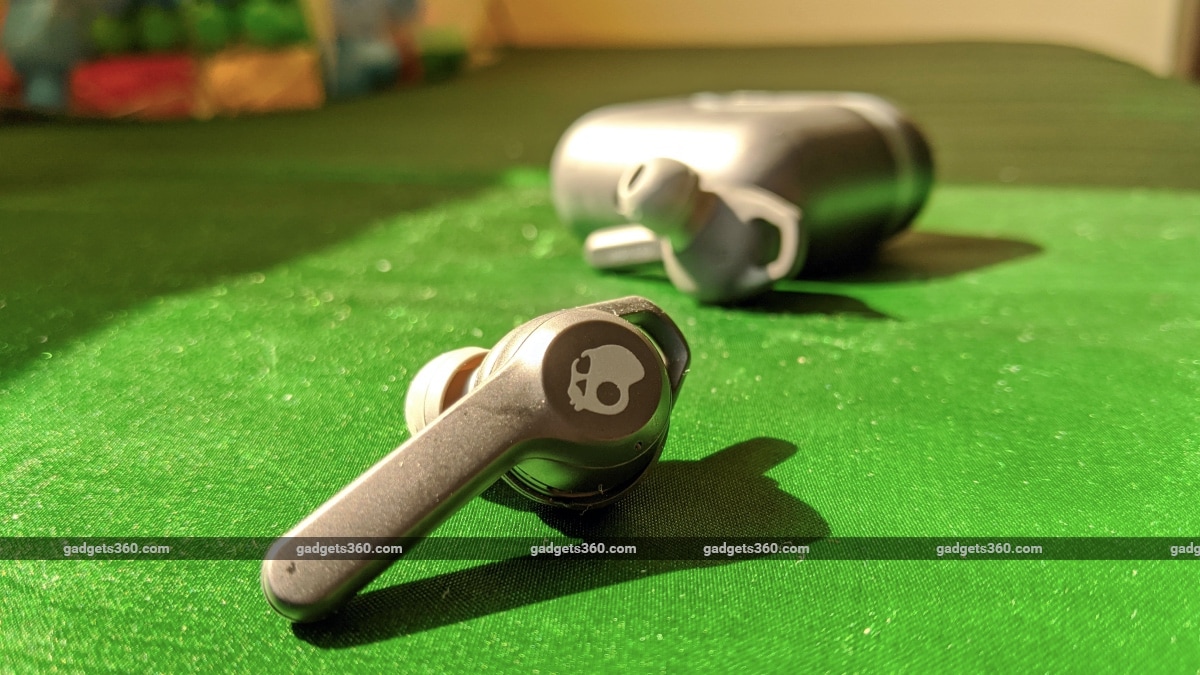 The Skullcandy Indy Evo isn’t quite as good as the competition in this price segment, but it isn’t too bad either.

The Skullcandy Indy Evo is an entirely ordinary pair of earphones. Sure, the fit is excellent, the controls are useful, and the bass is tight, but these aren’t reasons that anyone would typically choose a pair of true wireless earphones over another for. Where it really matters — that is, sound quality and features — the Indy Evo just about reaches a point of acceptability, but goes no further. You won’t be disappointed with these earphones, but you won’t be particularly thrilled either.

The Skullcandy Indy Evo simply ticks the essential boxes and doesn’t really go beyond that, unlike the excellent Lypertek Tevi which remains our top pick for under Rs. 10,000. Consider the Skullcandy Indy Evo only if you’re a fan of the brand, or prioritise a secure fit and styling above all else.

Which are the best truly wireless earphones under Rs. 10,000? We discussed this on Orbital, our weekly technology podcast, which you can subscribe to via Apple Podcasts, Google Podcasts, or RSS, download the episode, or just hit the play button below.