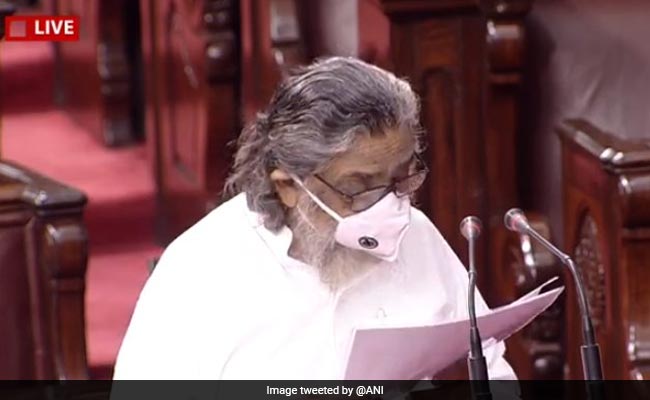 Shibu Soren, who had last month tested positive for the coronavirus, spoke feebly as he took oath.

On the opening day of the Monsoon session of Parliament that is being held with several restrictions in view of the COVID-19 pandemic, the MPs walked to the designated spot, took the oath but did not go for the customary handshake with Chairman M Venkaiah Naidu.

Mr Naidu welcomed them with folded hands as members came forward for the oath-taking, signed the register, and walked back to their designated seats, without approaching other leaders for greetings.

Mr Soren, 76, who had last month tested positive for the coronavirus, spoke feebly as he took oath in Hindi and was assisted by a Rajya Sabha staff member as he walked to his seat.

Banker-turned-politician, Mr Islam, who was elected to the Upper House from Uttar Pradesh last month, took oath in the name of God in Hindi.

From UP minister Jaiprakash Nishad of BJP also took the oath.

Congress leader Phulo Devi Netam, who was elected to the Upper House from Chhattisgarh, took oath in Hindi while NCP’s Fauzia Khan took oath in Marathi.

While TRS leaders K Keshava Rao took oath in Telugu, his colleague KR Suresh Reddy, who sported a scarf with an image of his party president, took oath in English.